Hi, Jessica here with my first solo post!  Originally I was planning on making a card using one of my large Hero Arts background stamps but I found a new stamp and ended up going in a totally different direction.  I had stopped at Michaels to look through their Christmas clearance and saw the Hero Arts International Skyline stamp on sale.  It was an interesting stamp but I couldn’t think of how I might use it so I decided to leave it behind.  Then I headed off to Target and was wandering around when I saw this pallet artwork.

I was convinced that it was a quote from the Pixar movie “Up” and a quick google search in the middle of the store turned up a ton of Etsy art prints with the balloons and the same quote underneath*.  Looking at the sign gave me a great idea for an anniversary card using the stamp I had left behind at Michaels.  So I headed back to Michaels and the stamp wasn’t there anymore!  I was so mad at myself for leaving it behind; but as I was walking past the registers, I saw it sitting on one of the counters.  I asked the cashier if it was being held for anyone and she told me that her last customer had changed her mind at the last minute and she just hadn’t gotten around to putting it back on the shelf!  It must have been fate!
Anyway, after that long backstory, here’s my card!  I created it as a 6th anniversary card for my amazing husband!  We’ve only been to one landmark on that stamp (the Space Needle) but I hope we’ll check off more over the years to come! 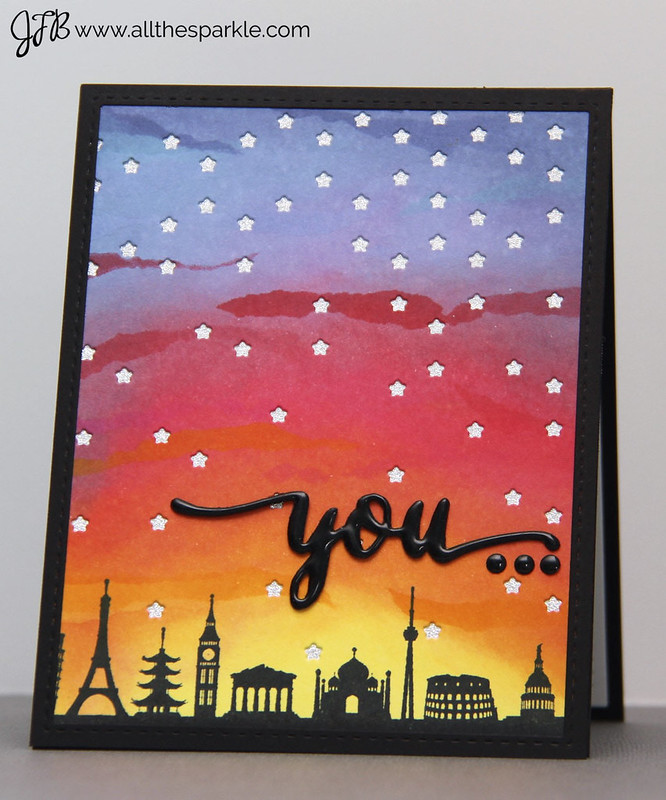 And here’s the inside: 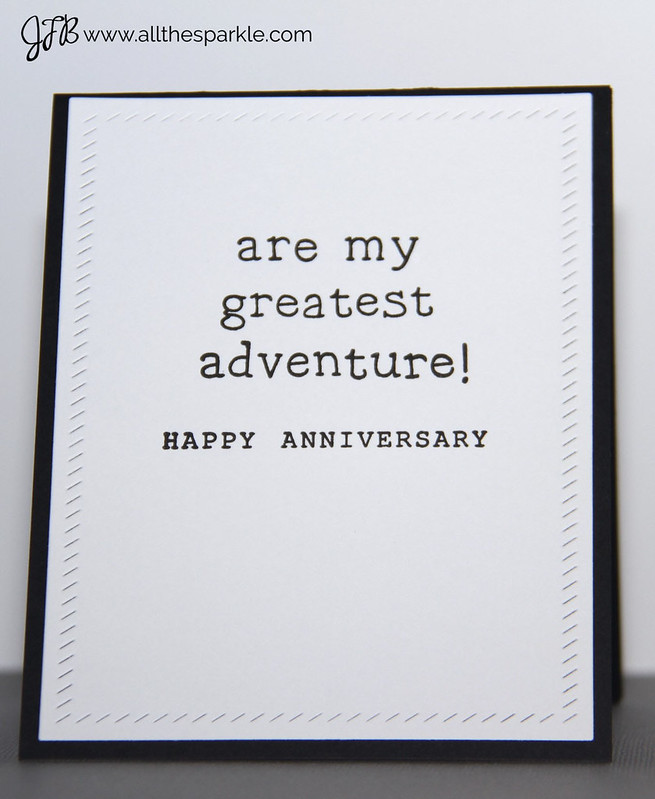 I started off by blending distress inks onto a piece of Neenah Solar White cardstock.  I used the following colors from the bottom up, Squeezed Lemonade, Wild Honey, Dried Marigold, Picked Raspberry, Festive Berries, Shaded Lilac, Salty Ocean, and Chipped Sapphire.  After they had dried completely I tore strips of scrap paper into cloud “stencils.”  I taped those to the card with post-it tape and blended the same distress inks onto the card but made sure they ended up a little darker.
I stamped the Hero Arts International Skyline stamp onto the bottom of the card with Versafine Onyx Black ink.  I wanted the sky to look like a sunset where the stars are just starting to come out so I ran the piece through my BigShot with the Simon Says Stamp Falling Stars die.  I layered a piece of silver glitter cardstock under the card to give the stars some shine. 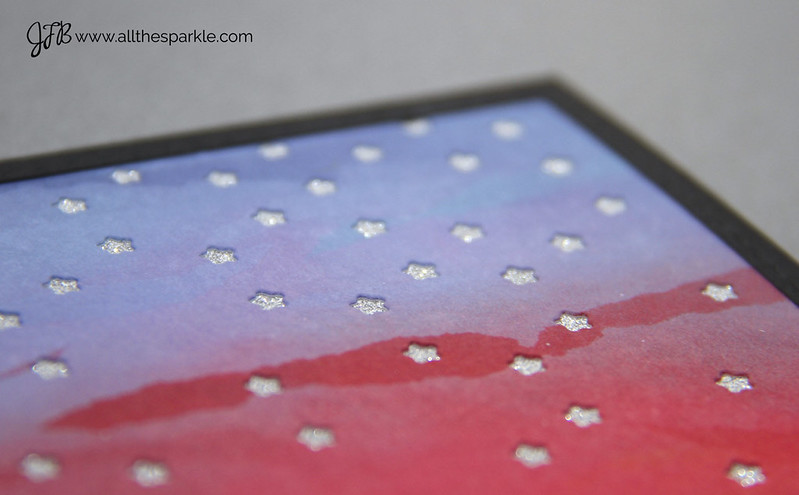 I cut a frame from the Simon Says Stamp Stitched Rectangles die and attached it around my card.  Then I adhered the piece to a black top-folding card.  I die-cut the word “you” from the WPlus9 Hand-Lettered Thanks set four times and glued them on top of each other.  Then I pressed it into versamark ink and heat set it with Wow Ultra High clear embossing powder.  I punched three small circles for the ellipses and used the same embossing powder for that high raised effect. 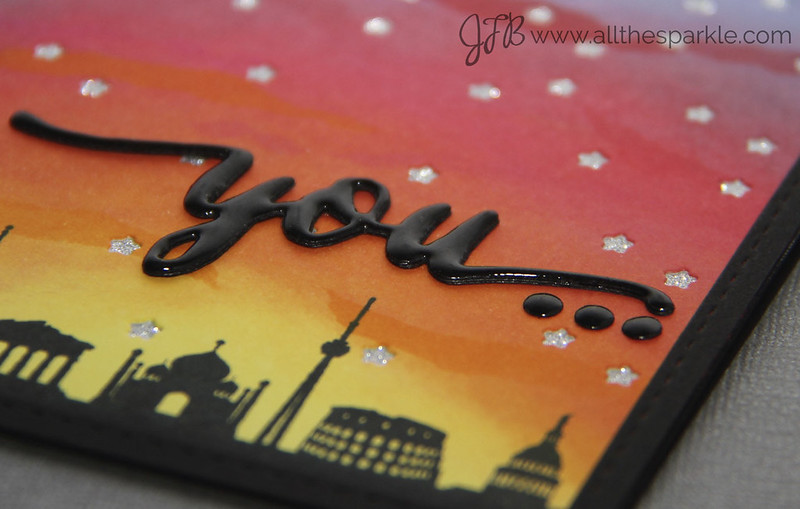 For the inside I used the larger frame from the Avery Elle Finished Frame die set to cut the white panel.  Then I used Smitty’s ABCs from Lawn Fawn to spell out the end of the sentence and stamped the Happy Anniversary sentiment from the Happy Everything set from Mama Elephant.
Thanks for visiting today!  Don’t forget to play along with our latest challenge, Personalize.  Our generous sponsor, Simon Says Stamp, is giving one random entry a $25 gift voucher!

*Of course when I got home I realized that it’s actually a quote from “The Incredibles.”  In “Up,” Ellie writes ‘thanks for the adventure – now go have a new one.’  In “The Incredibles” Mr. Incredible tells his family that they are his greatest adventure.  I mixed up the source but the sentiment behind it is the same.  Based on all the Etsy prints I saw it must be a common mix-up!  Oops…

InLinkz.com
Hi, I’m Jessica!  Let
me start off by saying, I am SO honored and excited to be joining the design
team for A Blog Named Hero and I’m incredibly thankful for the opportunity to work with
this super talented group!

I live in the beautiful Shenandoah Valley of Virginia with
my incredibly supportive husband, two feisty senior shelties, a stubborn
tortoiseshell kitten, and a no-nonsense Dutch bunny.  I am a professional musician by day: teaching
harp and piano lessons, directing a church choir, and freelancing for weddings
and other events…and a crafter by night!
I’ve been making cards since I was a kid but I’ve only recently been
able to really devote time and space to crafting when my husband and I built
our first home in 2013.  I love creating
personal cards for my friends and family and I can often be found stamping a
couple images or embossing a sentiment in-between lessons and gigs!  When I’m not working or crafting I also enjoy
cooking, photography, and DIY home projects.
For all that fun stuff (plus cards, of course) please visit me at my
blog, All the Sparkle!

For our introduction we were asked to create projects with a
Celebration or Party theme and here are my cards!  I love to create bright, colorful, and sparkly
cards and I really enjoyed making this set!
I didn’t intend to make four cards but I knew I wanted to use distress
inks and I just couldn’t pick one color combination!  I also wanted to make smaller square cards
that I could stuff into my planner so that I always have a festive card on hand
in case I forget a birthday, anniversary, or other exciting event!

I used the new Stitched Square dies from Simon Says Stamp
and die cut four squares of Tim Holtz watercolor paper.  The new sets of Stitched Dies from Simon Says Stamp: Circles, Rectangles, and Squares are amazing!  I highly recommend them for a great basic shape die!  I also cut four 4.25” squares of Doll Pink,
Island Blue, Green Apple, and Blue Violet Simon Says Stamp cardstock and then
used the same Stitched Square die to create a colored cardstock frame.  I prepped my watercolor paper squares with my powder tool before embossing the ‘celebrate’ sentiment from the Hero Arts Celebrate Everyday stamp set.
I mounted the sentiment onto my M.I.S.T.I. and inked it up with versamark before heat
embossing it with Hero Arts White embossing powder.

Then the fun part!  I
started off by smooshing distress ink onto an acrylic block in a fairly small
shape.  Then I spritzed the block with
water to get the ink nice and wet.  I
turned the block upside down, quickly pressed it over the embossed sentiment,
and held it in place for about 20 seconds to give the paper time to absorb the
ink.  After I lifted the block I used a
wet paintbrush to blend the colors so that the white sentiment was completely
surrounded by ink and legible.
Then I heat set the distress ink.
Next I liberally spritzed the area around the sentiment with pearlized
water and heat set it again.  I took Hero
Arts sprays in metallic gold and silver, unscrewed the cap, and dripped a
couple large drops of color onto the card using the spritzer cap tube.  I love my Hero Arts stamps but I’m also a
huge fan of their colorful Hero Hues sprays, gems, pearls, inks, and daubers and
you’ll be seeing a lot of those from me!
Finally I embellished the cards with a sprinkle of Pretty Pink Posh
sequins in coordinating colors.  To
assemble the cards I mounted the colored cardstock frames to square 4.25” top
folding cards and then inset the watercolor piece into the coordinating card.

I used the following color combinations:

Please don’t be scared off by the large supply list!  These cards are really versatile and would be easy to reproduce with your favorite blend of distress inks, watercolors, gelatos, or watercolor pencils and can be finished with sequins, gems, pearls, stickles, or whatever else you have in your supplies!  Thanks for stopping by and I look forward to sharing new Hero Arts creations with you soon!

We could all use some fairy wishes with @heroarts

Hi! @jenniferkotas here to “bug” you with one

Hello Hello! Gale finally back with some inspirat