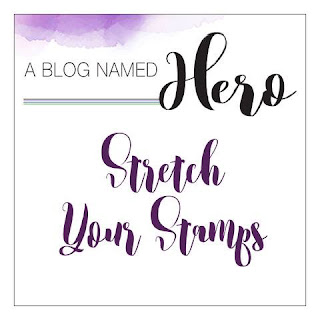 Hello there! Cha here and I would like to show you another card for the “Stretch Your Stamp” Challenge. Like my previous card for this challenge, I used a die set but giving it a twist. I hope you feel inspired to create your cards for this challenge! There are a few days left to join us in this August Challenge!

For this card, I used the Hot Air Balloons Nesting Infinity Dies for creating my card but in a different way. The aim of this set is to create a hot air balloon as this set is named but I used this set for creating a light bulb!. I picked two of the dies of the set that I lined them up and die-cut on a piece of white cardstock. I just wanted the frame for creating a bulb-shaped window card. I also used the smallest die from these two dies that I chose to die cut the front and the back of a white folded card so that we can see the inside of the card. I also die cut two pieces on a piece of acetate.

I glued the piece of acetate on the front of the card and started making the circuit for giving light to this bulb. I folded a little piece of cardboard that would hold the battery and glued the piece at the bottom right side of the notecard. I created the light circuit by adding the copper tape which will go from this folded piece of cardboard to the center of the piece of acetate, meaning that I had to create a “road” that goes from the battery to the led lights. I split the copper tape into two fine strips. I added one strip (positive terminal) from the base of the cardboard to the center of the acetate piece and added another copper strip (negative terminal) from the cardboard piece to the piece of the acetate without overlapping both copper strips. I added a yellow led light in the center of the acetate piece, between the two copper strips (the positive and the negative terminals). I made sure that this led light was a little bit on top of each copper strip. I added double-adhesive foam strips around the folded cardboard piece and added the battery correctly focusing on the terminals of the battery and the copper strips.

I created the bulb base on a piece of Silver Mirror Cardstock that I cut with scissors and left aside for a while. Besides, I die cut a small circle on Pitch Black Cardstock from the set Circle Nesting Infinity Dies. The sentiment that I picked was from an old My Monthly Hero kit (August 2017) that is not available anymore but there are many sentiment sets that you can use. I used an anti-static powder tool before I stamped the sentiment on the circle with Versamark Ink. Then, I heat embossed the sentiment with White Embossing Powder. I heat it with my heat tool*. Later, I added double-adhesive foam strips around the acetate piece and at the bottom of the acetate (bulb base), next to the cardboard piece that holds the battery so that I added the circle with the sentiment on top of the battery and the piece that I created as the bulb base next to it, too. I also added another piece of acetate and the bulb frame that I created previously on top of the foam strips that were around the bulb. In the inside of the card, I added a circle previously colored with Squeezed Lemonade Distress Oxide Ink.

I hope you get inspired to create cards for our August Challenge that is going to end in a few days! Show us your cards for this month!

Thank you so much!

This site uses Akismet to reduce spam. Learn how your comment data is processed.

Hi everyone! I'm sharing Pantone colours of 2021 i

Hi! @jenniferkotas here and I’m so happy to be a

Wanna be part of our amazing team?! Love @heroarts