Hello Crafters!
It’s Kelly Latevola and I can’t tell you how excited I am to be guesting back at A Blog Named Hero!

The Christmas Extravaganza has always been something I looked forward too whether I was on or off the team and this year is no exception! These talented ladies have been creating some stunning projects. Did you see Michelle’s card yesterday? That Sparkly Snowflake is to die for!! My little heart goes pitter patter for some glitter 🙂

Speaking of being inspired by other’s crafty fabulousness my card was inspired by one I found on Pinterest. Brigit’s card is actually back from 2011 but with the magic of pinterest I was able to see it and be inspired by it almost 4 years later! Kind of awesome right?! You can see Brigit’s card here.

Late’s talk Christmas memories… see mine was a tie and I didn’t want to give one up. My first one is from my childhood. My sister and I would sleep together in her bed on Christmas Eve, We’d stay up late chatting and then pretend to be asleep when our parents went to bed. See my mother refused to put any gifts out until we were in bed on Christmas Eve. So after they went to bed Kim and I would tip toe down stairs to see what was under it. The tree all lit up and the floor covered in beautifully wrapped presents with gorgeous colors. Plus, any of you little sisters know just how special that time was where my big sister wanted to spend time with me. It’s one of my most treasured memories. Legitimately, I’m tearing up writing this people. I’m such a sap. Anyway… moving on…

My second favorite Christmas memory is Christmas lights. See my father refused to put up Christmas lights. He said the tree in the picture window was enough to make the house pretty. What he really meant was they are a pain in the  you-know-what. I give it to him. They can be a pain. But man are they beautiful. My next memory is of decorating my own house for Christmas the first time. I was lucky enough to marry a man who has the same amount of enthusiasm for Christmas as I do. He freezes his butt off every year out there putting up those lights and I love him endlessly for it.

I wanted to incorporate both memories into my card. Here’s what I came up with.

If you went and looked at Brigit’s card (which I hope you do, it’s beautiful) you saw that she created a scene within a large leaf image. I thought this was the perfect way to combine my tree memory and my Christmas lights memory. I found a free tree outline image and printed it out on copy paper for a mask. I use repositionable adhesive to create my masks like this. If you do this make sure you get right up to the edge or when you’re rubbing on your distress ink it WILL get underneath. Ask me how I know 😉 Once my mask was in place I stamped my house and masked it too. I should mention I stamped the house second generation because I wanted to be able to add some shading to the roof which is a solid part of the stamp.
I drew some snow mounds on another piece of copy paper, trimmed them out and added repositionable adhesive to both the top and bottom. I used the top piece to mask my sky and rubbed on tumbled glass distress ink just to the bottom. This leaves the top of your snow bright white. Then I switched. I masked the snow with the bottom piece and rubbed on my sky colors. Before I removed the snow mask I inked up the tree from Sending Holiday Cheer and stamped it several times in various black inks. I also used second and third generation stamping to give the look of a “forest” of trees. Remove the snow and house masks.
I used copics to color my cabin. The original image is a solid house but I wanted a cabin. I was unsure of how to get an actual log look so I just went with wood boards. I think it worked out okay 🙂 I drew in some Christmas lights on the roof and windows with my copic multiliner. After I was done coloring the whole image I outlined the whole image with the same multiliner. Draw in some shading and foot prints in the snow and we’re done. Oh wait, Don’t forget the stickles! I added them to the lights and snow/icicles on the house. 🙂 It’s not Christmas without glitter!! Remove your tree mask and stamp your sentiment. I wanted the red door to pop so I decided to layer it on some bright red card stock.
Don’t forget to leave a comment today, and on all of the posts this month, as both Hero Arts and Simon Says Stamp have gift certificates to give away. The random winners will be chosen from all comments left on A Blog Named Hero from now until December 4th. The more comments you leave the better your chances of winning! Winners will be chosen on December 5th and announced soon after.

One of my favourite things about Christmas is something I have never experienced – a white Christmas!  I just love the idea of snuggling up in the warm while it’s cold outside, being able to eat traditional Christmas food in the climate it suits (eating traditional hot Christmas pudding when it’s 35C outside is always a bit odd), and wearing winter woolies while singing about chestnuts roasting on an open fire.

So, to help me get into the spirit of a white Christmas, I pulled out some Hero Arts Christmas goodies and got creating. I used the Hero Arts “Snowflake” die, and the sentiment is from “Decorate your Holidays”.

And, while I had the “Decorate your Holidays” set out, I decided to make another wintry card.

Now, how’s this for an early Christmas present?  We
have two $25 gift vouchers from Simon Says Stamp to give away to random commenters
on the blog!

All comments must be left on A Blog Named Hero, from November
1-December 4.  Winner will be drawn randomly on December 5th and
announced soon after.

I hope you can visit again tomorrow – my friend, Kelly Latevola will be here sharing some gorgeous Christmas goodies!

InLinkz.com
Hi everyone! It’s Tami Hartley here, happy to be joining in the month-long Christmas Celebration here at A Blog Named Hero.

So many of my fondest Christmas memories revolve around decorating the tree with my family, so today I thought I’d share a card featuring an ornament stamp. The Hero Arts World Ornament stamp was white heat embossed and then watercolored with a combination of Hero Arts Ink Daubers and Ranger Distress Inks. Both work wonderfully for watercolor techniques.

I wanted to keep the card mostly clean and white but felt like it needed just a little something, so I white heat embossed the Ironwork Background onto the card base. Silver accents of glitter tape, thread, and ink finish off the design.
Don’t forget, A Blog Named Hero has two $25 gift certificates from Simon Says Stamp as well as some Hero Arts goodies to give away to random commenters on the blog! All comments must be left here on ABNH, from November 1-December 4. Winners will be drawn randomly on December 5th and announced soon after. Good luck!

Thanks for joining me today! Be sure to stop by tomorrow for more holiday inspiration from the super talented Michelle Lupton.

Happy Holidays Everyone! Welcome back to our Christmas Event. I am very happy to share my little card with you. Well, not so little, it’s actually a 5 1/2″ square.

I took the outline poinsettia stamp from Hero Arts and stamped it on some embroidery cloth. Then read an embroidery tutorial, and came up with this. I really like it, I’m a fan of texture. I used the same stamp and embossed it in white on some kraft card stock. Then I took a patterned clothespin, pressed it into some Versamark and used the Gold Tinsel embossing powder from Ranger to transform the clothespin into this lovely gold “hanger”.
I popped the clothespin up on some foam tape, and that’s the only part that is adhered to the card front. This way the recipient can take the fabric piece off and do whatever they like with it. Like add a ribbon and hang it from a tree.
Don’t forget to leave a comment today, and on all of the posts this month, as both Hero Arts and Simon Says Stamp have gift certificates to give away. The random winners will be chosen from all comments left on A Blog Named Hero from now until December 4th. The more comments you leave the better your chances of winning! Winners will be chosen on December 5th and announced soon after.
Also, come back tomorrow to see what Tami has in store for us!
a Rafflecopter giveaway

Hello! It’s Lucy Abrams here, and I am thrilled to participating in ABNH’s month long Christmas celebration. One of my favorite things about Christmas is all the sparkle – fairy lights, candles, Champagne – I love it all. So I thought I’d create a super sparkly shaker card filled with sequins. 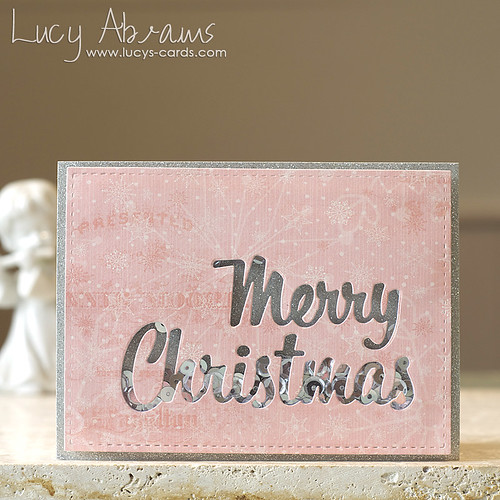 To create my card, I used the Fancy Cuts Christmas dies, cutting the words from some pretty Bo Bunny patterned paper. After backing this with some acetate, I filled the window with a ton of silver and clear sequins, then adhered it over some glitter paper. The result – a super sparkly interactive card that’s perfect for a lover of shiny things. 🙂 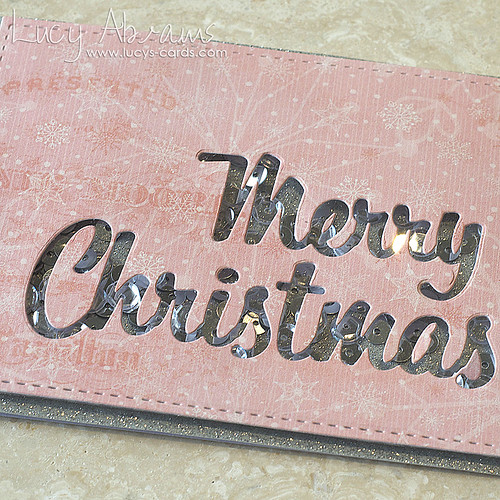 This was so quick and easy to create – you could definitely throw together a pile of these in an afternoon! And what a fun afternoon it would be. 🙂
Don’t forget to leave a comment today, and on all of the posts this month, as both Hero Arts and Simon Says Stamp have gift certificates to give away. Yay! The random winners will be chosen from all comments left on A Blog Named Hero from now until December 4th – so the more comments you leave the better! The winners will be chosen on December 5th and announced soon after.

Thanks for joining me today. Stop back tomorrow when Lisa Stein will be sharing more Christmas fun. Bye!